Jill lay on the grass for a long time, watching the sky turn above her. Clouds and stars. Blue and black. Like the blinking of a great eye staring at her, staring through her. She didn’t know if it really saw her. If it did it gave no indication. She supposed it could be communicating silently with some giant companion whose presence was beyond the scope of her perception, laughing or weeping over her splayed figure, her nakedness, her comparative smallness. She hoped so. She found herself suitably entertaining and she liked to share.

She was warm and comfortable on her grassy bed, needing no covering other than her skin. The sun and the moon seemed to give off heat in equal measure. She enjoyed the changing light, sometimes bright and all encompassing, sometimes endowed with shadows and shifting. So far it had never gone out completely. Darkness eluded her even when she shut her eyes.

And then she heard the storm, a distant, lengthy bellowing, heralding itself out of nowhere. It was too far away to stir her, but she was no longer perfectly warm. The air was moving, stroking her with fingers made manifest only by the tiny hairs on her arms, her legs, her stomach and breasts. Her first lover, the wind, tempted her away from her mother’s green embrace, but she refused for as long as she could, her hands palm down against the earth, her own fingers entwined in the grass, lightly clinging. She inhaled and the wind and grass competed for perfumed supremacy, one rich and familiar, the other electric and fresh. Perhaps because she knew she must soon rise she studied the familiar smell, committing it in detail to memory, storing it for future use. The smell of home is potent medicine.

It was time. She looked at the sky, but there was no visible evidence of the approaching storm. She wanted to see it, needed to see it, so she sat up and there, creeping over the horizon, were its dark, enormous wings, rising slowly in preparation for the great downward rush that would propel it toward her. The rain would be cold. She could tell. Too cold for her to remain as she was. She shivered at the thought. The blue of the sky and the green of the grass she committed also to memory, filling the medicine bag of her soul. They might not keep her warm, but they would fortify her nonetheless.

Sun yellow, green grass, sky blue, white cloud, stars uncovered, head clear, life strong and at its beginning. Flat plain, pathless, undisturbed by time and weather. Slow turning of mother and father, gentle dance, untrained eye. She accepted her birth, her presence here in the world and so accepted the change that must come. Send me off with a kiss, she thought. She liked kisses.

The sky was darkening now as the great storm bird gathered his strength and spent it in small, angry bursts. She could hear rain falling under him, see it begin its sweep over the land. His spirit scorched the earth, his tears cooled it. She must get out of the way for these things were too large for her small bit of drama. She could not hope to compete. She would be swallowed up, nameless, featureless once again, unless she secured herself.

She looked behind her and there it was, the door between where she was and where she would be. There was nothing supporting it, no wall, no structure that she could see, no clue to where it led. It was just a door. The storm breathed strongly upon her and where once the light was clear and sweet all was now bathed in bruised, alien twilight. She must go, so she turned, opened the door and stepped through. 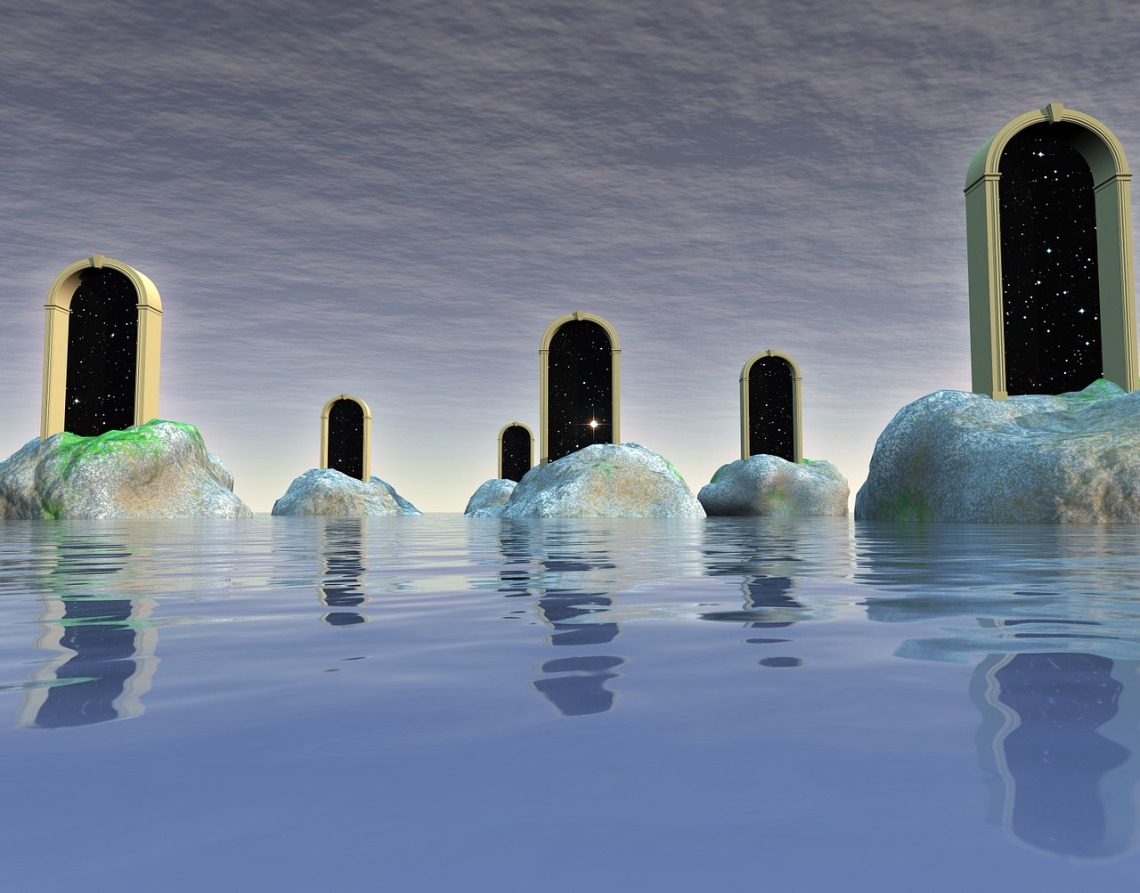